For many years it has been known that injecting a small amount of electric current in certain parts of the body’s visual system creates the illusion of seeing small dots, so-called phosphenes. This can be done in the nerves in the eye itself, in the optic nerve, or in the primary visual cortex of the brain. Even for blind people this phenomenon is present.

The geometric mapping in the eye and the primary visual cortex of the brain is sufficiently simple, so stimulating at a single location will make a phosphene appear at a specific place in the visual field. By exciting several phosphenes at once, an image or video stream can be transmitted to the brain.

As this is not a new phenomenon, many research groups and companies have performed research based on this principle. Most were focused on stimulating in the eye.

In general, a visual prosthesis contains: 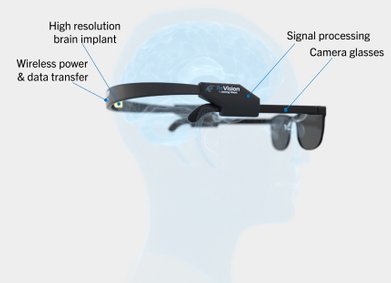 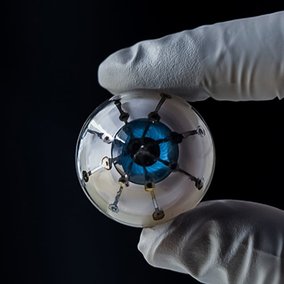 A quick Google search for 'bionic eyes' or 'vision prostheses' returns many hits. The truth is that all devices demonstrated so far have insufficient performance. The image quality they offer is simply not good enough to convince potential blind users.

We have identified 5 key problems with the current state-of-the art:

Our Occular prosthesis will not only incorporate a high count of electrodes directly in the visual cortex, but also uses advanced stimulation patterns optimized to obtain higher resolution. Moreover, Occular is based on flexible micro-electrode technology, minimizing scar tissue formation and fascilitating scaling up to a high resolution. The electrode arrays also cover a large fraction of the visual cortex, making restauration of both peripheral and central vision possible.

Higher resolution is crucial for restoring practical vision. Implant users expect to be able to navigate a room or a city, but also to perform most tasks that come with normal, daily life. In order to achieve this, an image quality equivalent to a greyscale image of over 1000 pixels is required. This is far from what current visual prostheses offer. In contrast, with our approach we will surpass this threshold and achieve breaktrough performance. 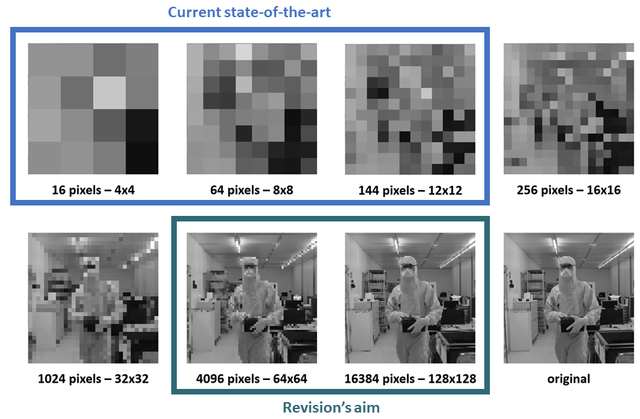 In contrast to the metal or silicon microelectrode arrays of the past, ReVision uses soft, highly biocompatible materials. Our arrays are as thin as a single brain cells, and therefore ultra-flexible. This makes sure that they can move along with the brain's tissue, drastically minimizing irritation and scar tissue formation.

The arrays use advance electrode materials that allow for sufficient charge injection despite the small electrode size. Long term stability under continuous stimulation conditions has been demonstrated. 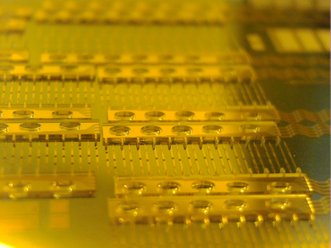 The neurosurgeon only has a few hours to insert over 1000 electrodes in the brain. Obviously, this cannot be done one-by-one. Moreover, the disadvantage of ultra-flexible electrodes is that they are not stiff enough to be inserted without aid.

To solve these issues, ReVision has developed and patented a novel insertion technique. We have shown that this insertion technique allows to insert  hundreds of ultra-flexible electrodes in an animal model with excellent long-term performance. Tissue damage was proven to be absolutely minimal, with only a one cell layer thin scar forming around the implant. The achieved electrode density was similar to the density later required in the human visual cortex. 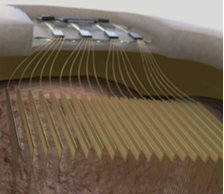 Thanks to the use of ultra-flexible implant technology, ReVision’s Occular device will allow to implant microelectrodes in regions of the visual system that serve both the peripheral as well as the central field of view. Therefore, Occular users will have a more natural, wide-view experience. 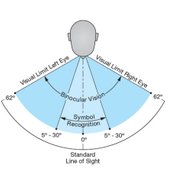 Our advanced stimulation algorithm research aims to improve the resolution with an additional factor 10x, an order of magnitude beyond what is possible with brute upscaling of the number of electrodes alone. This additional boost in resolution will make the difference between restoring basic functionality and obtaining decent image quality. 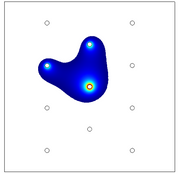